The biggest storm of the 2012-2013 winter season so far is behind us. Official records for Cincinnati are taken at the Cincinnati/Northern Kentucky International Airport; 2.9″ inches of snow fell at the airport, making today the snowiest single day since January 20, 2011 (707 days ago) when 5.6″ of snow fell. As promised Monday and Tuesday, there would be a wide range of snow and ice amounts in the Tri-State, and there were. Here’s a map of selected snow and ice accumulations (all that can fit on the map) in southwestern Ohio, northern Kentucky, and southeastern Indiana through 9pm: 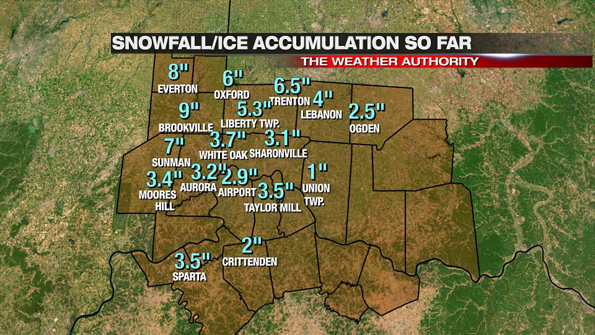 This is the objective analysis from NWS Wilmington as of Thursday morning. This report includes reports collected yesterday and reports from spotters that regularly call into the NWS each morning: 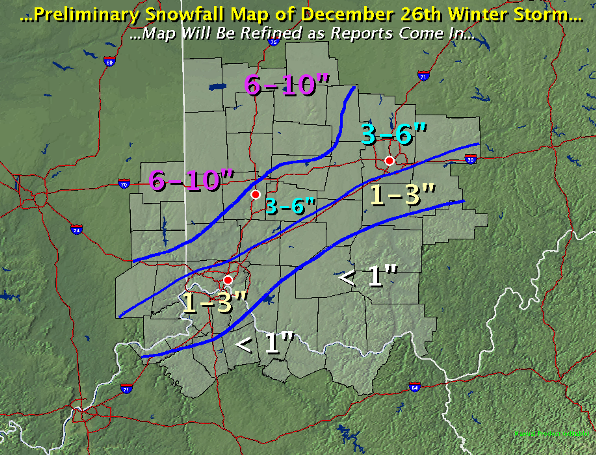 So how accurate was the forecast from Tuesday night? Here’s what I had on the air at 11pm Christmas night: 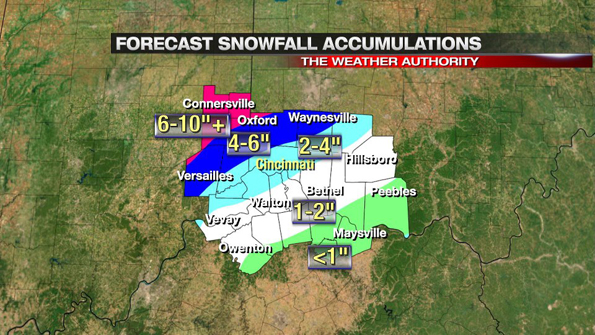 Only very subtle changes were made to John Gumm’s forecast at noon Christmas Day for the 4pm-11pm newscasts. More than 24 hours out, John had nearly every town in a correct snow and ice accumulation snow total band. What an outstanding forecast! After afternoon and morning model runs, I made very few changes to his forecast (the biggest being the extension of the 6-10″ band into northern Ripley County and central Franklin County). The title on this graphic should read “snowfall and ice” instead of just snow, but most saw 0.1″ of freezing rain accumulation or less. Brookville is the outlier on the map, but totals around Brookville ranged from 6″ to 9″ Wednesday afternoon. Considering there was blowing and drifting snow along with freezing rain and rain mixing in along and south of I-71, the forecast worked out quite well. Forecasts like these don’t always work out this well, but I’m thankful this one did.

On a personal note, the hardest part of the day was hearing this story: http://www.local12.com/news/local/story/One-Person-Dead-After-Crash-on-I-71/C9HaT52MzkapO7aJEUQyLQ.cspx

While it is sad to hear of a crash that was most likely weather related, it was even harder to see this knowing that I highlighted the blizzard – or at bare minimum “blizzard-like” – conditions in this area as a band of heavy snow came through on-air. This is what the Buckeye Traffic camera looked like at the intersection of I-71 and Fields Ertel Road around 4:40pm Wednesday: 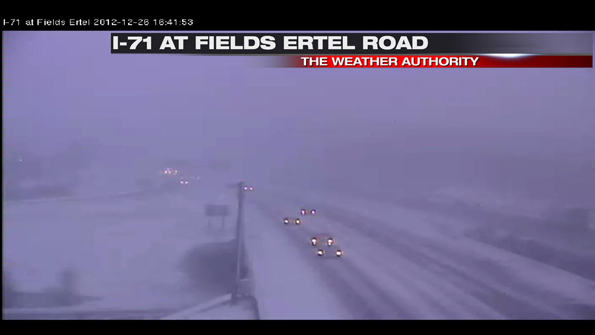 Roads were mostly snow covered, and the visibility was significantly reduced due to blowing snow. I told people on the air Wednesday to not drive in this area (and other areas with blowing snow) if they didn’t have to or until the band of snow had moved out of the area. Unfortunately, an 18-year-old woman lost her life Wednesday along this road, and this upsets me. It is hard to reach people in their cars, but I wish I could have.

On a lighter note, I want to thank all of our spotters that gave us snow and ice reports through the morning, afternoon, and night Wednesday. This job is much easier with your support and help!

This entry was posted in Reflections. Bookmark the permalink.