Don’t let the snow, snow grains, thick clouds, and cold fool you; March is the start of our peak severe weather season in the Tri-State. In 2012, severe weather had a early, deadly start with a tornado outbreak on March 2nd. This event was unusually early in meteorological spring, but it is a reminder that severe weather can happen any time of the year and often happens outside of our main severe weather season.

Long-term trends suggests the potential for severe weather really ramps up in March, but most tornadoes and severe storms affect the Tri-State in the late spring and summer. Since 1950, the most active month for tornadoes in the Tri-State is April; it’s a close race for second place between May and June, and July is firmly in 4th place:

23 tornadoes have been confirmed in the Tri-State during the month of March. 9 of these tornadoes occurred on March 2, 2012. If the March 2, 2012 tornado outbreak had never happened, March would have similar tornado count to August and November:

On average, only two Flash Flood Warnings are issued in March in the Tri-State: 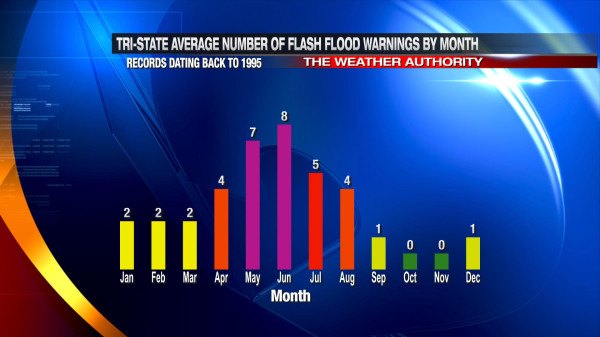 May and June are the busiest months for flash flooding in the Tri-State, but flash flooding can still occur in the summer and early spring in long-duration heavy rain events or with slow-moving thunderstorms in the area.

While the week ahead looks rather cloudy and cold, our peak severe weather season is coming. These cloudy, cold days are the perfect time to prepare for severe storms. Make sure you have a severe weather safety kit with water, shoes, medicine, flashlights, and batteries.