June is usually our busiest month for severe storms in the Tri-State. Spring – so far – has been very calm; only 13 Severe Thunderstorm Warnings have been issued in the Tri-State so far in 2013. On average, 26 Severe Thunderstorm Warnings are issued in southeastern Indiana, northern Kentucky, and southwestern Ohio each June. Model data suggests the next few weeks could be rather stormy.

Before diving into the data, the idea from this blog post came from me noticing a Twitter conversation between Ryan Wichman at WTOL in Toledo and Seth Binau at NWS Wilmington…and Ronald posting about this potentially stormy pattern on my Facebook page. Some of the topics mentioned below came from them.

Why do the next few weeks look so stormy? The best argument for this can be seen in the upper-level pattern. Models suggest an area of high pressure will be setting up over the Plains this week (and likely in the weeks to follow), forcing disturbances to ride up and over this ridge of high pressure and dome of heat. Here’s what this morning’s GFS thinks the upper-level flow will look like Friday morning: 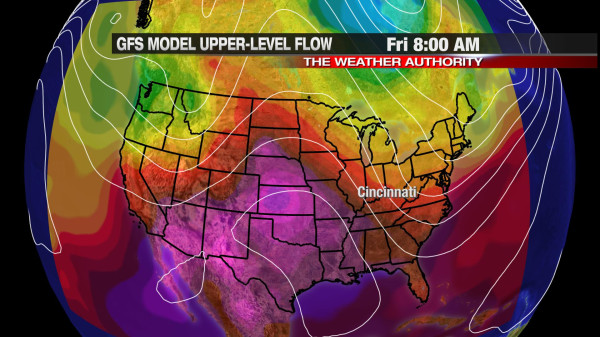 The “bubble” over the southern Plains is the area of high pressure. The warm (red and purple) colors show where the core of heat will be; in this case, red and purple colors support daytime highs in the 90s and 100s if little or no rain is forecast.

This morning’s ECMWF model has a similar upper-level pattern for Friday morning: 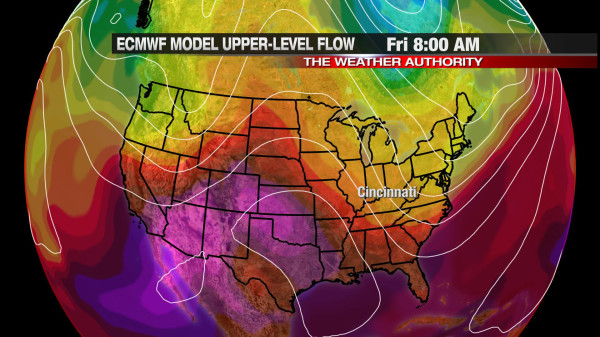 It’s important to note that upper-level winds tend to flow parallel to the lines on the map. In essence, here is path upper-level disturbances will take later this week per the GFS and ECMWF model, respectively:

This pattern won’t change much into next week per this morning’s GFS Ensemble model:

…or this morning’s ECMWF Ensemble model: 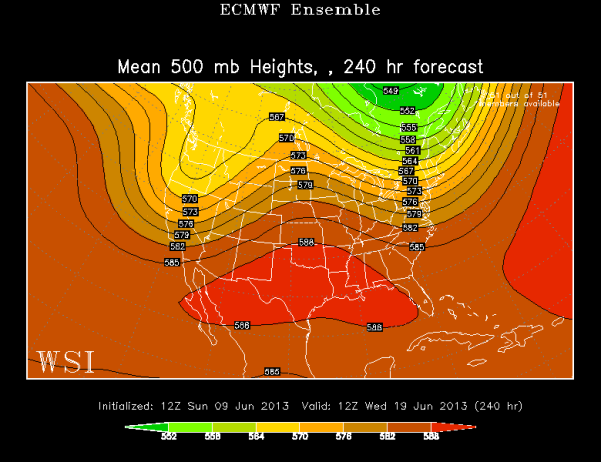 One way to assess the potential for severe weather is to compare the upper-level pattern to other days with a similar upper-level pattern in the past…and see what happened. This technique is called analog forecasting. What do the analogs suggest will happen? If you look at the GFS model’s output for Wednesday, the top 15 analogs (similar patterns) suggest a threat for severe storms. Here are all of the Storm Prediction Center storm reports for those top 15 analogs (wind reports are in blue, hail reports are in green): 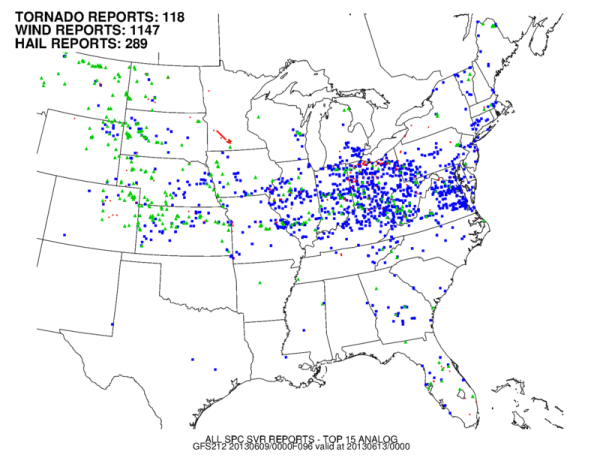 This storm pattern is likely not going to break down without a fight. The latest run of ECMWF Weekly model has the best chance for 3/4″+ of rain from June 18-24 in the Ohio Valley and Great Lakes:

…and the best chance from June 25 to July 1st in the Ohio Valley and southeastern United States:

When you look at all of the data, there is fairly high confidence for a stormy pattern in the second half of June. The specifics on timing and strength of each disturbance will be tricky to pin down until we get close to each event. Our first chance for seeing strong and severe storms in this pattern comes Wednesday and into Thursday.

Are you prepared for some bouts of storms?