Posted on October 3, 2013 by scottdimmich

With all of the focus on the consequences of the shutdown, I thought I would try to lighten the mood and see if there was a correlation between a government shutdown and how much cold and snow Cincinnati got in the winter that followed. Ian Livingston of the Washington Post’s Capital Weather Gang looked at a similar correlation (just for the Washington D.C. area), so I tip my hat to him for this idea.

In the modern era (since the mid 70s), Cincinnati winters that follow a federal government shutdown are usually colder, snowier, or both colder and snowier than average. For the sake of this discussion, “winter” is considered to be “meteorological winter,” or December, January, and February only. 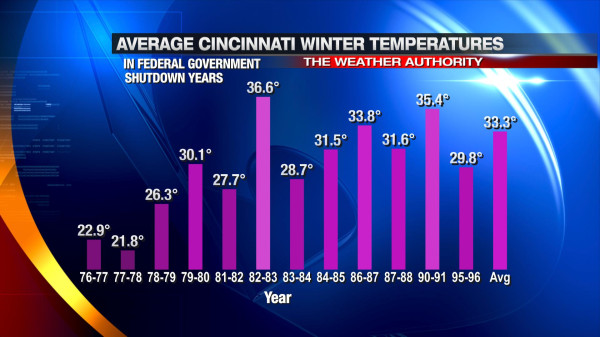 Only 3 out of the 12 winters shown above were warmer than average. Note that the second coldest and coldest winters on record (1976-1977 and 1977-1978, respectively) are listed. The average of all of the “shutdown winters” above is roughly 3.2° below average, although the brutal winters of 1976-1977 and 1977-1978 pull the average down significantly; without these two years included, the “shutdown winters” average is about 1.7° below the seasonal average.

What about snow? Here’s a list of snowfall totals in the winter following a federal government shutdown:

7 of the 12 “shutdown winters” were both colder and snowier than average.

Of course, this exercise is all for fun. A government shutdown does not mean we will get a certain type of winter. A winter forecast will be developed in the days and weeks to come; look for it later this year.