What You Need To Know About Wednesday Night’s Severe Threat

While it is most common in the spring, severe weather can happen at any time of the year in the Tri-State. A Tornado Warning was issued for Adams County at 12:30am three days before Christmas in 2013. 8 Severe Thunderstorm Warnings were issued that month. Severe weather happens in December.

The risk for strong and severe storms on Wednesday night has increased in the last 48 hours. There are several things for which we have a good understanding, and there are other things that have yet to become clear.

As the graphic above suggests, the most likely time for strong to severe storms to occur in the Tri-State is 9pm Wednesday to 2am Thursday. There are consistent signals that this is the most likely window for strong storms, but storms may develop earlier based on some recent computer guidance.

The threat for severe weather will be highest in the western half of the Tri-State Wednesday and lower for the far eastern parts of the Tri-State. All of southeastern Indiana, most of northern Kentucky, and much of southwestern Ohio is in a SLIGHT risk for severe storms per the Storm Prediction Center: 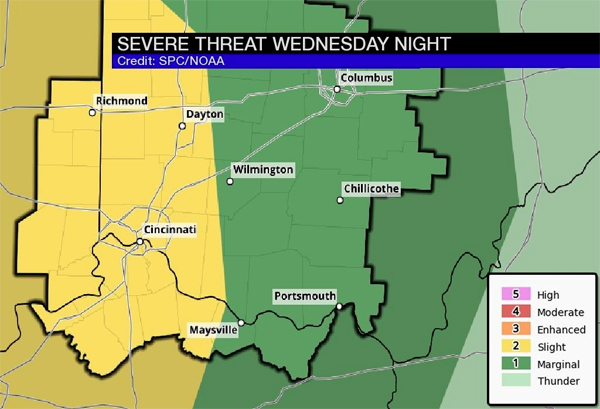 The rest of the Tri-State is a lower, marginal risk for severe storms.

Initially, storms that develop in the Ohio, Tennessee, and Mississippi Valley Wednesday will be cellular but will likely coalesce into a line or lines of storms. The threat for damaging straight-line wind is typically higher with lines of storms, while discrete, individual storms can pose a higher tornado or hail threat.

Showers and rain will let up during the afternoon, but showers and storms will redevelop near and after sunset: 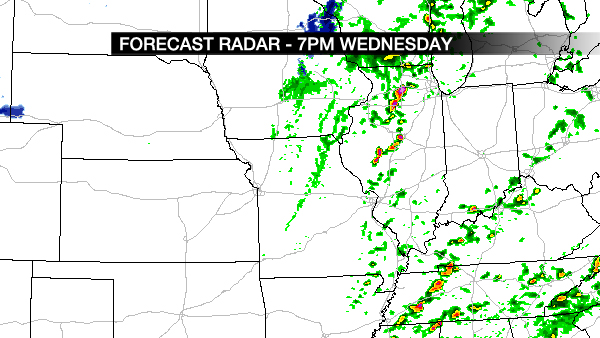 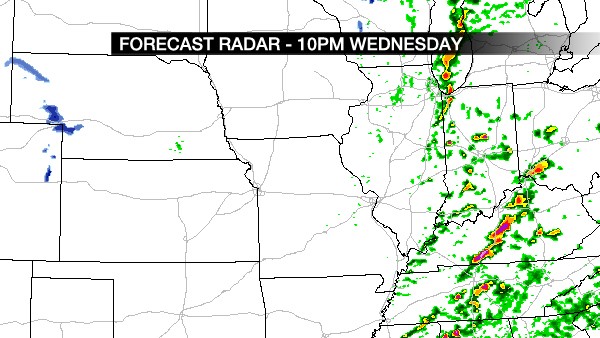 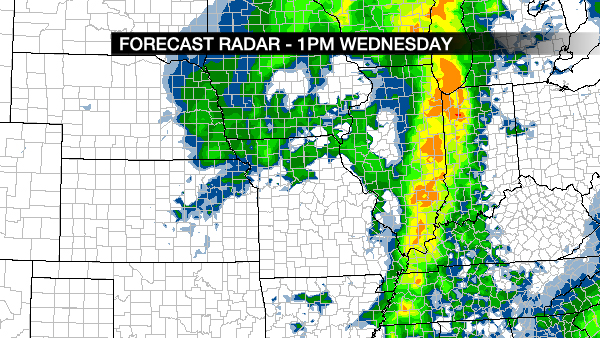 It is far more aggressive with the development of storms to our west Wednesday afternoon. It also has that line to the west meeting up with clusters of rain and thunderstorms ahead of the line near Cincinnati very early Thursday morning: 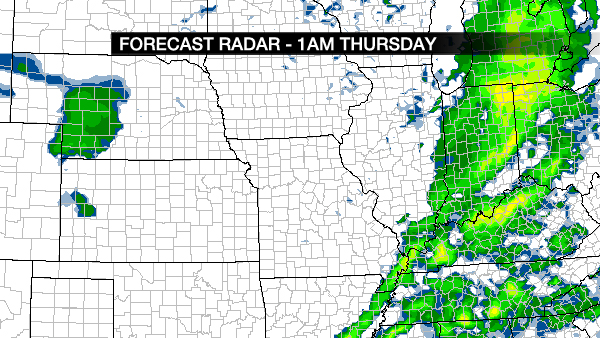 Notice the differences between the high-resolution and low-resolution WRF models. This leads to a needed discussion on…

While there are discrepancies in timing and severe weather threats tomorrow night,  there is little doubt that thunderstorms will develop in the Ohio, Mississippi, and Tennessee Valleys tomorrow and continue into Wednesday evening. Tuesday morning’s WRF model suggests the jet stream (in blue) will be strong from the Plains to the Great Lakes around midnight Thursday, with upper-level divergence (lift) strongest along the Ohio River from Cincinnati to Cairo, Illinois. 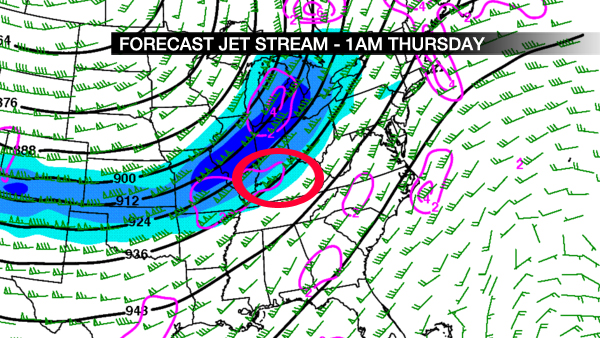 As I blogged about in a similar, colder season severe weather setup on December 19, 2013 (see mention of Tornado Warning and severe weather notes above):

While instability can often have a big influence on the chance for thunderstorms, it isn’t as important this time of the year. If thunderstorms are likely […], the SHERB parameter or index can be very helpful to a meteorologist in the colder months when looking a threat for severe weather. The SHERB parameter is helpful for getting a handle on a severe weather threat in the colder months because it focuses on temperature changes near the ground, lift in the atmosphere, and wind shear instead of instability (instability tends to be low in the winter even when we get severe weather).

Values of 1.4 to 1.6 are rather high for this time of the year. This does not guarantee severe weather will occur, but it certainly suggests the severe weather threat is elevated.

High temperatures will be in the mid to upper 60s tomorrow. The record high Wednesday in Cincinnati is 66° set in 1933. That record forecast to fall tomorrow. Record warmth, dewpoints in the 50s and 60s, and strong wind will be signals of a rising storm threat.

Be weather aware tomorrow and tomorrow night! Remember, the forecast and severe risk may change tonight and tomorrow. Stay alert for updates!