What Are The Odds Of Hitting 60°+ In January?

What are the historical odds of getting a 60°+ high temperature any given day in January? Here’s the breakdown: 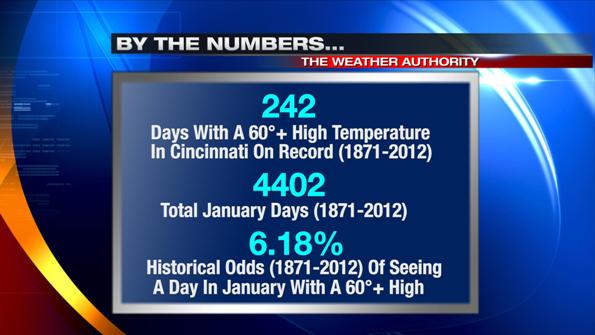 After crunching the numbers, I was a little surprised the odds were this high. In January, getting a high in the 60s usually requires strong southwesterly flow, no snow on the ground, and an abundance of sunshine.

You have to hit 60° at least 6 times in January to make it on the “Most Number Of 60°+ January Days In Cincinnati” list:

The odds of us hitting 60° Friday and Saturday are good, especially with moisture surging up from the south and allowing lows temperature to only fall into the upper 40s to mid 50s.

If you love warm weather, enjoy the spike in warmth late week because high temperatures will be near average in the mid to upper 30s Monday, Tuesday, and Wednesday.