Winter Is Not Over For Cincinnati And Here’s Why

There is a great buzz around Cincinnati about the warmer temperatures this week, and there are great reasons for the buzz. People are more inclined to get out and make the most of the day when the sun is out and temperatures are mild. This mild stretch is especially welcome given brutal cold early this month and for most of last month.

We have not seen the last of winter, however. No, there is no immediate threat for snow. Temperatures near or below zero aren’t likely either. This change in the pattern will mean a drop in temperatures though. Right now, the jet stream is positioned to our north, and the influence of an upper-level area of low pressure to our west is minimal: 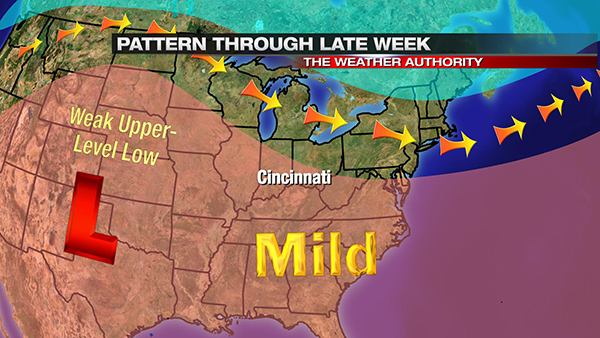 The pattern we are in now will be changing some this weekend and more drastically next week. Tuesday morning’s European (ECMWF) model shows cold air associated with an upper-level low diving south into New England on Sunday morning: 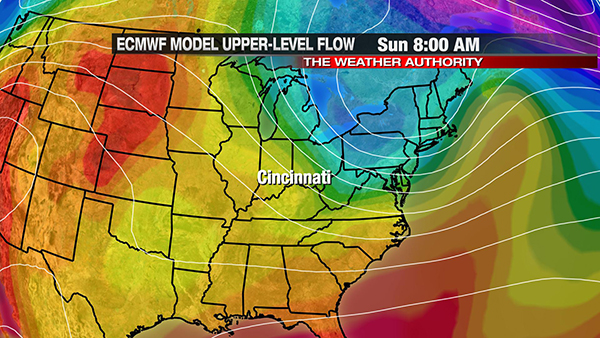 The ridge over the Rockies and Plains (and it’s associated warmth in red) will mainly hold through the weekend, but the Tri-State will still get a glancing blow of cold Saturday through Monday. Lows will briefly dip into the 30s Sunday and Monday morning.

The biggest blast of cold will come late next week. The large, upper-level area of low pressure moving south out of Canada will not be pushed easily to the east by the jet stream. This area of cold will push the ridge in the Plains back to the west, and this new pattern will likely persist through late March and at least a couple of days into early April: 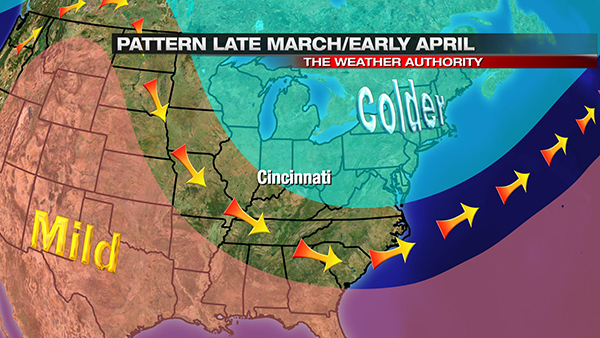 While the jet stream is to our south later this month, this air mass may bring temperatures back into the 20s at night and 30s to 40s during the day. Some model runs have painted very light snow in the Ohio Valley during this extended period of cold, but there is no specific time when snow more likely than other (if it even occurs at all). Cincinnati averages 0.5″ of snowfall accumulation each April, so don’t think it won’t happen!

In summary, here’s how my latest long range forecast thinking…

Notice that specifics are not a part of this long range prediction. Specifics on timing and positioning of weather systems are rarely resolved well more than one week out. With time, trends will turn to numbers. For now, know our time with above-average warmth is limited.