When you think of Tri-State tornadoes, you may think of March 2, 2012 or April 9, 1999. If you’ve lived in the Cincinnati area for a while, you may also remember April 3, 1974. The tornadoes of June 2-3, 1990 are often forgotten because there were no fatalities from tornadoes that night. There were, however, roughly 40 injuries in southeastern Indiana and southwestern Ohio during the event; all of these injuries came from an F2 tornado extending from Ripley to Dearborn County and from an F4 tornado extending from Dearborn to Warren County:

The highest rated tornado in the Tri-State that night was an F4 that went through Harrison, Ohio and also caused damage up to Mason. This tornado began two miles west of Bright, Indiana and continued into northwestern Hamilton County, where 32 homes and five businesses were destroyed. Two 18-inch, 75-foot long, 5/8″ steel beams designed to withstand winds up to 250mph were twisted to the ground at a restaurant in Harrison. The tornado continued into southern and southeastern Butler County where 19 homes and 4 mobile homes were destroyed. 58 homes, 22 mobile homes, and five apartment buildings were damaged. The tornado ended about 1 mile southwest of Mason, Ohio in Warren County.

A little known fact about the Harrison area tornado is that the path of the tornado is not continuous despite official records listing the damage from Bright to Mason as one tornado. The tornado briefly lifted near New Baltimore, Ohio and settled back to the ground in Colerain Township near Pippin Road. While the tornado lifted, the path’s interruption was brief enough to count as one tornado per NWS directives. Current NWS directives (specifically, NWS Directive 10-1605) state that if a tornado’s path is interrupted for more than 2 miles OR more than 4 minutes, the tornadoes will be rated separately. This NCDC website suggests “a tornado that lifts off the ground for less that [sic] 5 minutes or 2.5 miles is considered a separate segment. If the tornado lifts off the ground for greater than 5 minutes or 2.5 miles, it is considered a separate tornado.” Official NWS records (from the National Climatic Data Center) suggest the tornado lifted near New Baltimore, Ohio at 10:10pm EST and touched down again in Colerain Township, Ohio at 10:14pm EST. While close to being two separate tornadoes, official records list the damage from Dearborn County to Warren County as one tornado. It is unclear to me which definition is correct and/or was the correct definition at the time. Here is a map showing the tornado’s path on the evening of June 2, 1990: 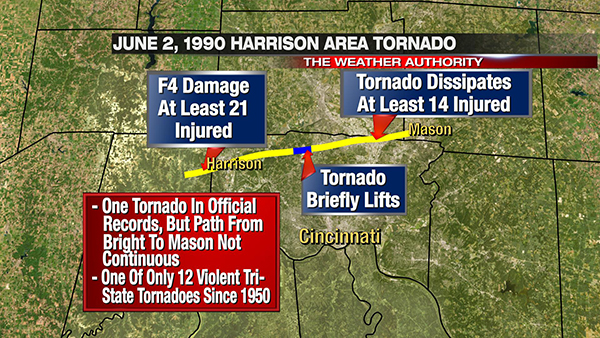 The F2 tornado that affected Ripley and Dearborn County that night produced 3 injures and caused mainly tree damage. The Hopewell Church in western Ripley County near Holton was, however, destroyed.

Radar images of this event are of poor quality, but it appears that a cyclic supercell was responsible for the damage extending from Holton to Mason. Other, weaker tornadoes were confirmed in Boone, Clermont, and Clinton County that night.