More Storms Than Usual This Month, Summer, And Year?

Many in the Tri-State feel that this has been an abnormally stormy month, summer, or year. Perhaps it is the intensity of the rain, the frequency of the storms, or the lack of days with abundant sunshine that have people thinking there have been more storms than usual this year.

I keep a database of Severe Thunderstorm, Tornado, and Flash Flood Warnings for the area. The records go back to when the National Weather Service Forecast Office in Wilmington, Ohio first began issuing warnings in 1995. While we are not halfway through the month of August, the Tri-State Tornado and Flash Flood Warnings counts (from January 1st to August 31st) are below the averages and records for the same time period. The Severe Thunderstorm Warning count is above average: 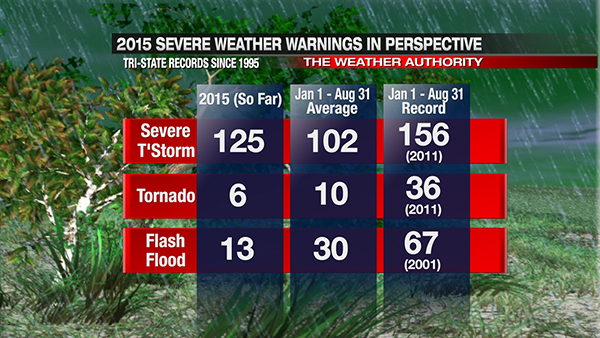 These numbers suggest this has been a stormy year in some ways, but not in all. Many forget how stormy 2011 was. 2011 was also the wettest year on record in Cincinnati (with yearly records dating back to 1871).

Many have said that this August has been abnormally stormy. One way to measure this is by comparing the August Severe Thunderstorm Warning count from one August to others:

On average, there 12 Severe Thunderstorm Warnings are issued in the Tri-State each August; so far in 2015, 17 have been issued. By this measure, it has been a stormy August, but more warnings were issued in 2007 and 2010. It is worth noting that August 2015 has not yet ended, so that count is not final.

Has this been an abnormally stormy summer? If you compare the Tri-State Severe Thunderstorm Warning count from June 1st to August 31st, there have only been 3 years since 2007 with more warnings:

On average, 59 Severe Thunderstorm Warnings are issued in the Tri-State each summer (June, July, and August combined). While we are ahead of the average, we are unlikely to break the summer record of 103 warnings set in 2008.

I’ve found that when people compare seasons, they often compare it to last year or the previous season. 2011 and 2012 were stormy years and – in many ways – stormier than 2015.

There are also dozens of ways to measure how stormy a period of time is. 2015 has been a stormy year for Brown County, where three flash flood fatalities occurred earlier this year. Those are the first storm-related deaths in Brown County since March 2, 2012. Where you live, what you see, or what you doing see influences your memory of storms.

This entry was posted in Reflections, Weather. Bookmark the permalink.