What Was The Biggest Local Weather Story Of 2012?

Posted on January 1, 2013 by scottdimmich

When you reflect on all of the weather events in the last year, what do you think was the biggest? Was it the 100°+ heat this summer? Was it the snow and ice late in December? Was it the daily rainfall records set early in the year? Was it the drought that lasted for months? 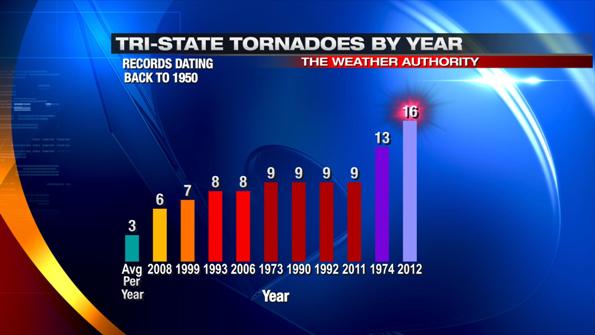 The Piner/Crittenden tornado was originally rated an EF-3 tornado, but was upgraded to a EF-4 tornado 7 days after it hit. Including this tornado, only 11 tornadoes in the Tri-State have been given an F4, F5, EF-4, or EF-5 rating since records began in 1950: 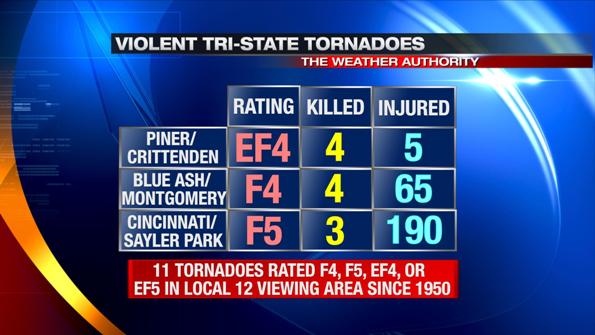 The Terminal Doppler Weather Radar (TDWR) used to track storms around the Cincinnati/Northern Kentucky International Airport captured the tornadic supercells on March 2, 2012. In this scan from 4:51pm, a hook echo (left) and strong rotation (green next to red on right) were apparent with the storm that produced EF-3 tornado damage in Holton, Indiana:

The TDWR also captured strong rotation (on right) and a debris ball (on left) with the tornadic supercell that hit Piner, Kentucky:

A debris ball is a “ball” of higher radar returns caused by larger objects (debris) being lofted by a tornado.

In total, 10 people died in the Tri-State as a result of this event. The first ever Tornado Emergency was issued on March 2nd, 2012; another one was issued shortly after the first one.

Despite March 2, 2012 being the deadliest severe weather day in the Tri-State since records began in 1950, the number of Tornado Warnings issued in that same area (26) did not break a yearly record (36 set in 2011): 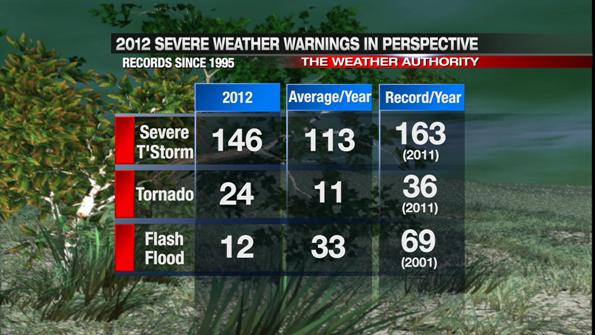 The number of Severe Thunderstorm and Tornado Warnings in the Tri-State were both above average. Given the drought most of the year, Flash Flood Warnings were rare.

Many in the United States – including the national media – focus on only the Henryville tornado when March 2, 2012 is discussed. While 11 people tragically died from the tornado that tracked north of Louisville that day, March 2, 2012 was more than just this tornado. The people who were injured and killed by tornadoes on March 2nd in southwest Ohio, southeastern Indiana, and northern Kentucky should not be forgotten.

This entry was posted in Reflections, Weather. Bookmark the permalink.