36 Years Ago Today: The Coldest Morning In Recorded Cincinnati History

Today marks the 36th anniversary of the coldest low temperature on record in Cincinnati. The Cincinnati/Northern Kentucky International Airport dropped to -25° on January 18, 1977; the high temperature that afternoon was only 0°.

It was brutally cold in the Tri-State that morning, but a map of early morning lows for January 18, 1977 reveals that some spots got colder than others: 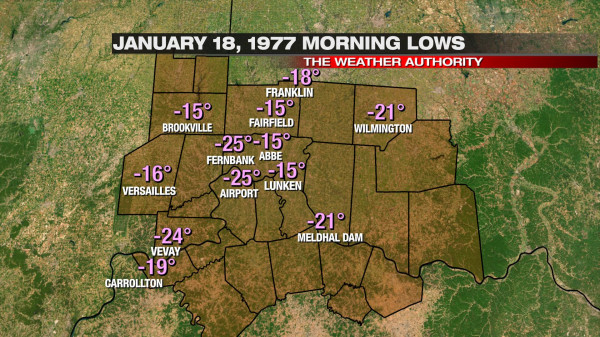 Data from NOAA’s Earth Systems Research Laboratory shows arctic air (in purple) surging not just into the Ohio Valley that day, but all the way down to Florida and the Gulf of Mexico:

Many unsuccessfully tried to drive their cars across the river while the river was frozen. You may also remember seeing the Cincinnati buildings perspiring in the arctic air:

Cincinnati has only dropped under -20° four times since the coldest day on record…once each in January 1984 and 1985 and twice in January 1994. This anniversary is a reminder that arctic air can – and often does – push south this time of the year. While it won’t be as cold as January 18, 1977, next week looks to be the coldest stretch so far this season.

1 Response to 36 Years Ago Today: The Coldest Morning In Recorded Cincinnati History