Where The Upper-Level Low Goes Later This Week

There is no doubt that a cold front will sweep through the Tri-State late Monday night and early Tuesday. This front will bring rain, and it will – eventually – help to bring cold air from Canada into the Ohio Valley. In the wake of this cold front, an upper-level area of low pressure will get cut-off from the upper-level flow; in turn, this upper-level low will sit and spin over us until the jet stream can dislodge it to our northeast. While there is high confidence this upper-level low will stick around into the second half of the work week, there is great uncertainty about when it will leave.

Both this morning’s GFS and ECMWF agree on a subtle warm-up from Sunday into Monday. I’m forecasting a high temperature of 48° Monday afternoon and a low temperature of 36° Monday night. The latest model data suggests the temperature may rise late Monday night as low-level moisture gets pulled into the region on a strengthening east-southeasterly wind.

The GFS model has a surge in warmth midnight Tuesday in the Tri-State ahead of the cold front: 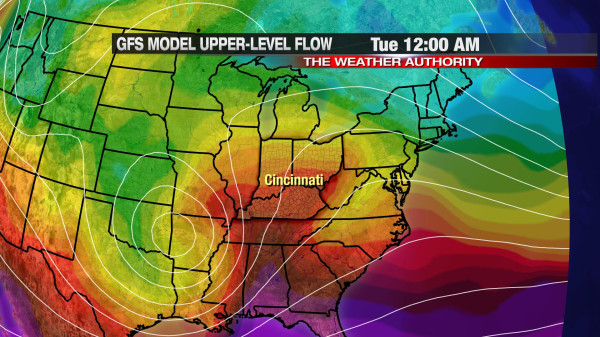 This morning’s ECMWF model is nearly identical to the ECMWF at midnight Tuesday; it has a surge in warmth ahead of the front and the upper-level low centered over the Mid-South: 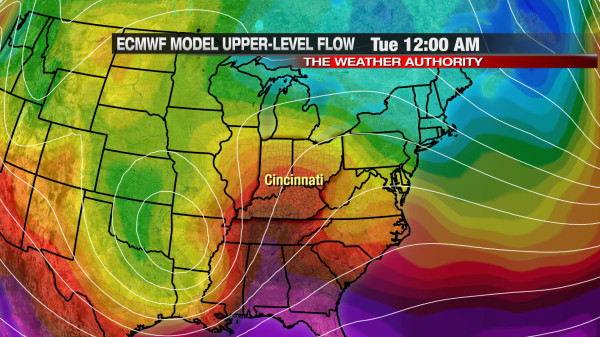 The forecast gets a bit messier nearing mid-week. This morning’s GFS model has the ill-defined upper-level low in the Ohio Valley by 8am Wednesday morning: 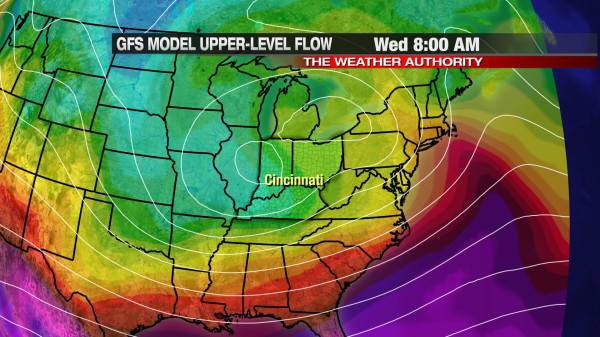 The latest ECMWF model run has the upper-level area of low pressure over Cleveland by 8am Wednesday…and brings slightly colder air to Cincinnati by then compared to the GFS model: 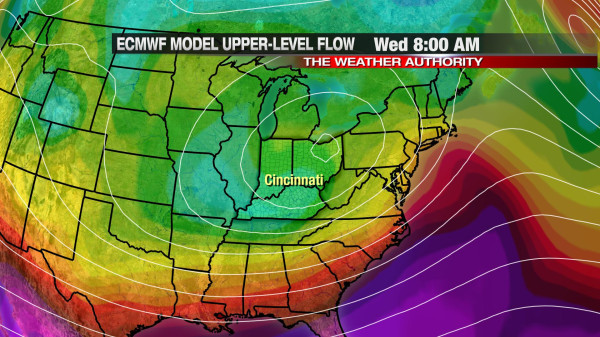 The GFS and ECMWF aren’t really that different by mid-week, but the differences between the GFS and ECMWF become greater nearing next weekend. The GFS has the main upper-level low over New England and a secondary low trying to form over the interior Midwest: 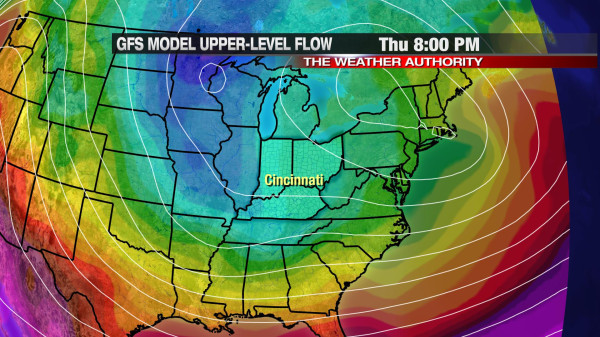 Also, notice the colder air (shades of blue) extending out of southern Canada. If you assume the GFS model verifies, this re-enforcing shot of cold air will mean clouds, flurries, and snow showers will stick around through next Saturday night and Sunday. This morning’s ECMWF model has a different solution; it says the main upper-level low is over Boston, has no secondary low forming west of the Great Lakes, and has no big surge of arctic cold air diving south out of Canada: 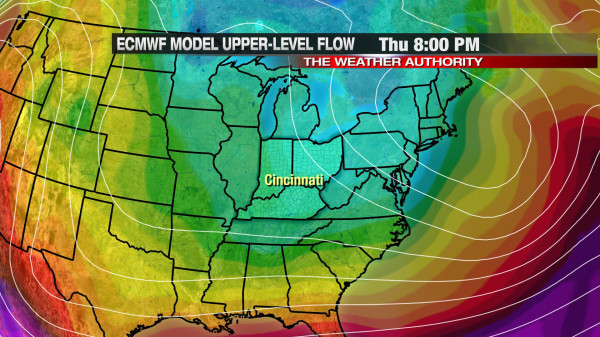 If you believe the ECMWF model, snow showers and flurries will stick around through Friday but will be gone by Saturday and Sunday.

Which model do I believe? I’m leaning towards the GFS for now, but I still give a nod to the ECMWF; I have flurries and snow showers in the Tri-State Thursday, Friday, and Saturday and only flurries early Sunday.

This forecast will likely need to be revised as next weekend nears. Regardless of which model you believe, winter is coming back later this week!