Like I’ve done every snow event this season, I will hold judgement on specific amounts until we get much closer to the event. For this bout with wintry weather, we’ll get a rain/snow mix Monday night through Tuesday and snow Tuesday night and early Wednesday. No ice is forecast in our area with this mid-week system.

It is important to note that three different areas of low pressure will move through the eastern 2/3rd of the country between now and Thursday. Here is a plot showing the track of each low pressure system, as analyzed by NOAA’s Hydrometeorological Prediction Center:

A rain/snow mix will develop in the Tri-State Monday evening  and continue through Tuesday. Very minor accumulations are possible early Tuesday, but rain will likely be the main precipitation type Tuesday afternoon with temperatures in the mid to upper 30s. Rain and snow Tuesday afternoon will transition to all snow Tuesday night. My forecast low for Wednesday morning in Cincinnati is 29°. Accumulating snow would be a much bigger threat if low temperatures were forecast to drop into the low to mid 20s. Nonetheless, our main window for accumulating snow will be late Tuesday night and early Wednesday.

I will share the latest model snowfall forecasts in this blog with you not in an effort to pinpoint specific amounts but instead to show uncertainty and where the focus for heavy snow will be.

Notice the NAM’s forecast of 20″+ for the Washington D.C through 7pm Wednesday. This morning’s GFS model brings the threat for accumulating snow closer to Cincinnati but keeps heavy snow over northern Indiana and Ohio: 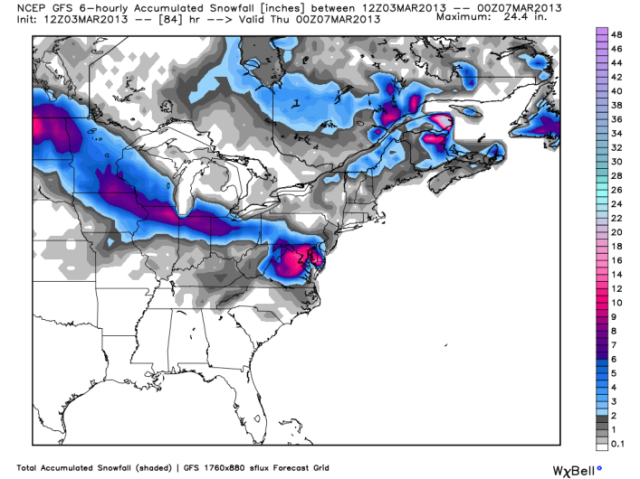 Sunday’s morning’s ECMWF model is the most aggressive model with snow Tuesday night and early Wednesday:

The ECMWF brings a swath of 5-10″ of snow up to the edge of the Tri-State. This model is an outlier, and – for now – I do not believe this is where the heaviest axis of snow will set up.

NOAA’s Hydrometeorological Prediction Center gives the Tri-State a 10% of seeing 4″+ of snow from 7pm Tuesday through 7am Wednesday, but chances for 4″+  of snowfall accumulation ramp up quickly northwest and east of Cincinnati:

For now, plan on accumulating snow Tuesday night and early Wednesday. The Tri-State is fair game for an inch or more of snow and potentially more if temperatures trend cooler than forecast early Wednesday morning.