When Is A Warm-Up Coming?

Meteorological spring began on March 1st, but astronomical spring begins Wednesday morning at 7:02am eastern time. Despite what the calendar shows, it won’t feel like spring tomorrow or any day in the near future.

The colder-than average stretch we’ve been on for a couple of weeks is likely to last at least two weeks more.

NOAA’s Climate Prediction Center issued a forecast Febuary 28th suggesting that there was an equal chance of a warmer or colder than average March. This forecast is unlikely to verify:

The last several days of March will likely be colder than average based on the latest guidance. This morning’s GFS model run suggests temperatures will be well below average (blue and green colors) Thursday morning over much of the nation: 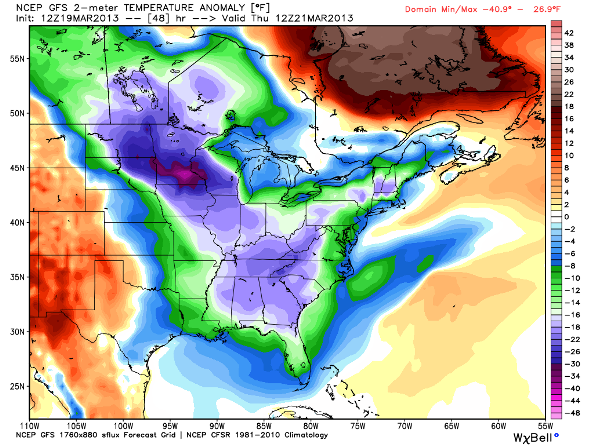 The latest ECMWF ensemble model also suggests below average temperatures (blue and purple colors) for most of the nation early Thursday morning, including in the Tri-State: 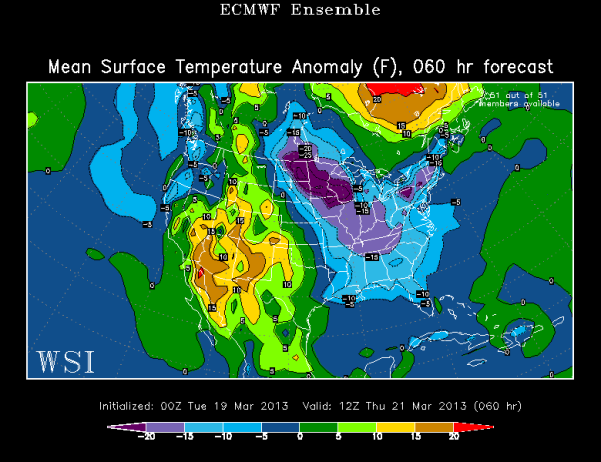 If we fast-forward to next Wednesday morning, it’s more of the same. This morning’s GFS model suggest temperatures will be colder than average (blue, green, and purple colors) for the eastern two-thirds of the nation:

The latest ECWMF ensemble model agrees with the GFS model regarding below average temperatures (blue and purple colors) next Wednesday morning: 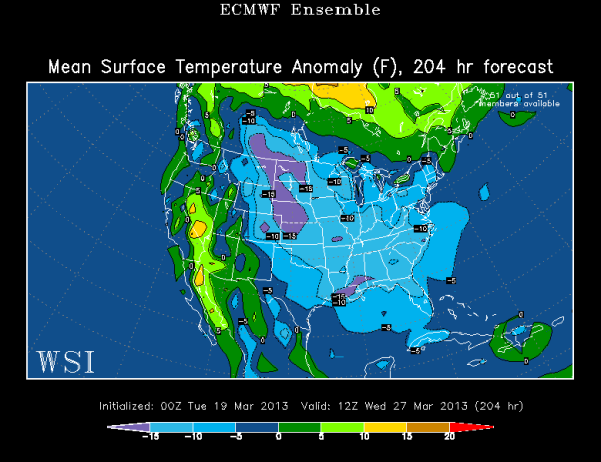 Based on this model data, it seems unlikely that a significant warm-up anytime in late March. This morning’s GFS, however, suggests a ridge of warmth may be building into the heart of the nation during the last week of March:

This is a promising sign for those of you looking for a warm up. The strength and positioning of this ridge, however, is very uncertain; in turn, there is no guarantee that a warm-up is coming in early April.

In summary, it is too early to speculate on when a warm-up is coming. Confidence is fairly high, however, that the rest of March and at least a few days in early April will be colder than average.