Perspective On Mid-September Chill And The Long Range Forecast

Posted on September 13, 2013 by scottdimmich

After summer-like heat and humidity earlier this week, cooler, less humid air has returned to the Tri-State. The Weather Authority is forecasting low temperatures in Cincinnati early Saturday and Sunday morning to be in the mid to upper 40s. Communities north, northeast, and northwest of Cincinnati will likely drop into the lower 40s early Saturday and Sunday morning.

In the last roughly 4,200 September nights in Cincinnati, we’ve only dropped into the 30s 66 times and into the 40s 712 times. When you focus on just the last several years, we typically drop into the 30s or 40s a couple of times each September: 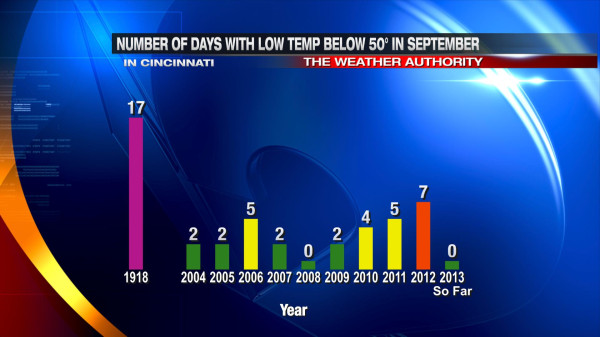 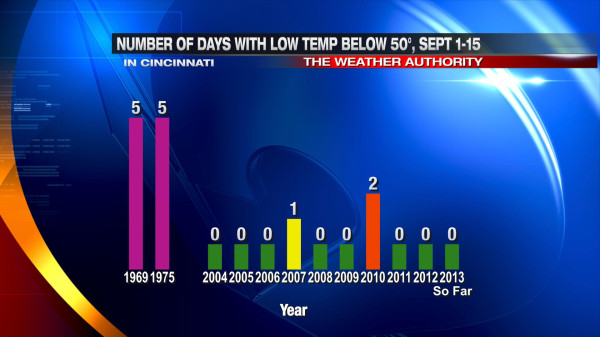 In 1969 and 1975, Cincinnati dropped into the 30s and 40s 5 times in the first 15 days of September; these are records for the most number of days with a low temperature below 50° in the first half of September.

With the wind sustained near 5 mph overnight and temperatures in the 40s, frost is not a possibility this weekend. Here’s some perspective on when our first fall frost is (using a low temperature of 38°): 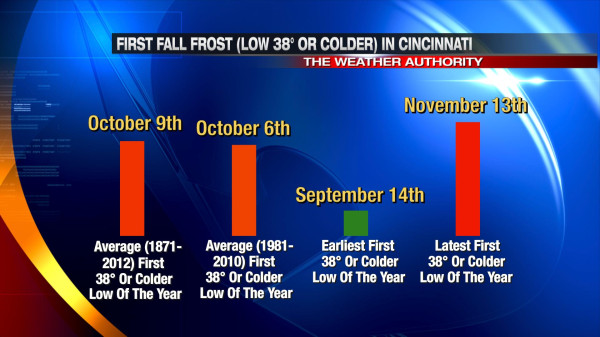 Frost is rare in mid-September, but it has happened. The temperature dropped to 37° on September 14th, 1964 in Cincinnati. Our first fall frost is more likely in late September or early October.

Does an overnight low in the 30s or 40s in early or mid-September tell us anything about fall or winter temperatures? Let’s look at the years mentioned above where we dropped into the 30s and 40s and see how the fall and winter that followed turned out: 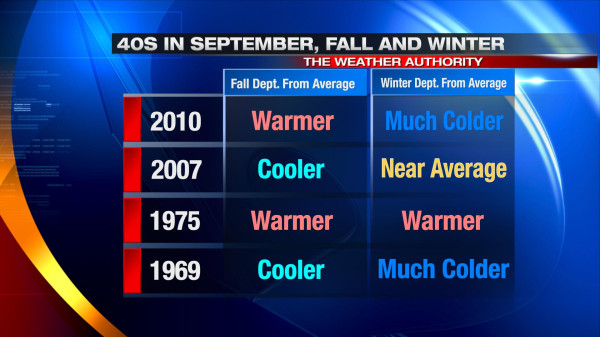 Stay warm this weekend! We’ll have highs in the 80s and lows in the 60s again by Thursday and Friday.