Historical Perspective On The Last Week In Cincinnati 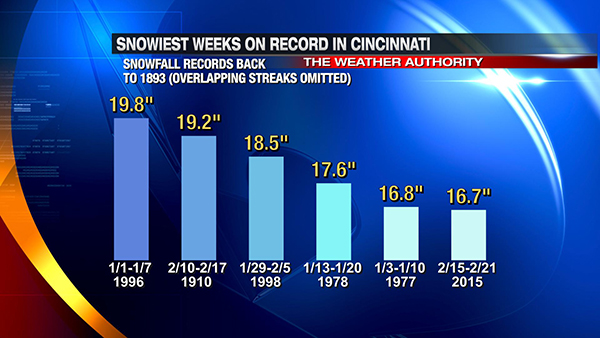 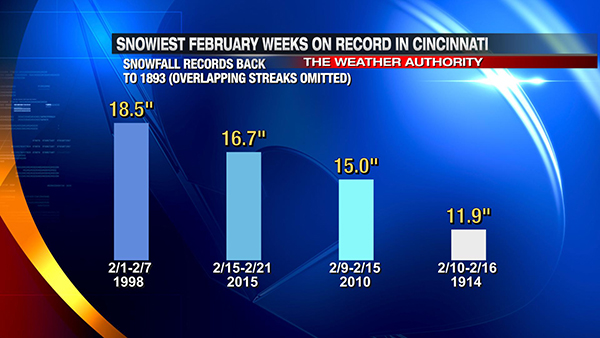 This abnormally snowy stretch has pushed us to 5th place on the snowiest Februarys on record in Cincinnati:

…and the month is not over. The amount of snowfall recorded at the Cincinnati/Northern Kentucky International Airport in the last 7 days is 92% of the amount of snow that typically falls in all of meteorological winter (December, January, and February combined):

The seasonal snowfall total through February 21st is now up to 25.0″. On average, 22.5″ of snowfall is recorded in Cincinnati from one summer to the next. All snow that accumulates for the rest of the winter and spring just adds to the surplus.

This winter has been “bottom heavy.” More than double the amount of snow that fell between last summer and February 14th has fallen in the last week: 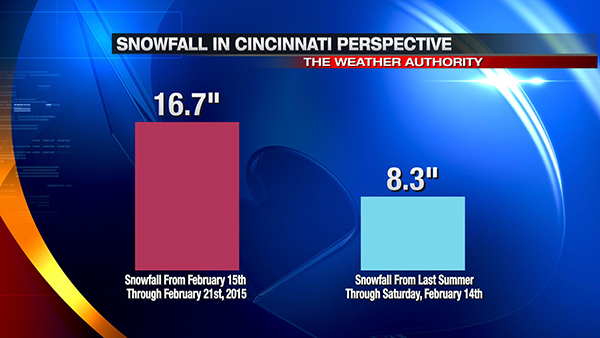 “Bottom heavy” describes not just snowfall accumulation this winter, but it also describes cold. If February had ended at midnight on Sunday, February 2015 would be the 8th snowiest February on record:

If meteorological winter 2014-2015 had ended at midnight February 21st, it would rank as the 19th coldest back to 1870-1871. There is still plenty of time for our ranking to change, but it doesn’t look like the ranking going to slide down. Saturday morning’s American long-range (GFS) model has arctic air plunging into the Great Lakes and Ohio Valley to start off the work week:

It has another shot of arctic air coming late in the work week:

…and another area of arctic air to the Ohio Valley before next weekend begins:

Winter is far from over. At least a few more waves of very cold air and snowy will swing into and through the Ohio Valley during the next 2 months. Temperatures will moderate some in March, but cold will win out for the next several weeks.