Comparing This Cold Season To The Last One

If you rule out snow, the most common way to measure how brutal a winter was is to compare the average temperature of one meteorological winter (December/January/February) to another. 2014-2015 beat out last winter by 1.25°:

It is rare from late March through early November to have a high temperature below 32° in Cincinnati, so the current tally of 32 days for 2014-2015 is unlikely to rise much if at all.

While cold days are inconvenient, cold nights are often more difficult to deal with and are discussed more. In the cold season of 2014-2015, however, there have been fewer days with a low temperature below 0° than last season: 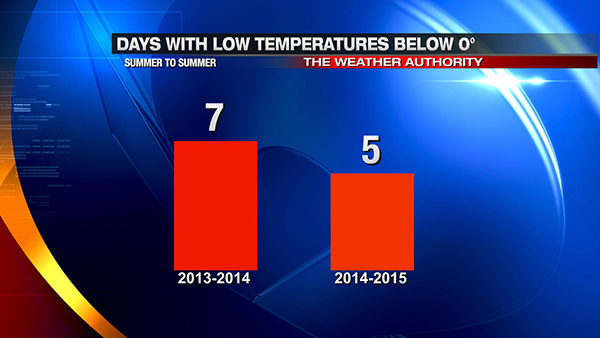 In my opinion, winter 2013-2014 was worse than winter 2014-2015. For the former, the amount of snow was overwhelming, and the shots of cold were sharper. For the latter, the cold was more prolonged and the winter storms produced more snow. This cold season, however, is bottom-heavy, meaning most of the snow and cold came late (and we’re not done yet). Had December 2014 been colder, this cold season would have easily rivaled the cold season of 2013-2014.

1 Response to Comparing This Cold Season To The Last One