Posted on February 8, 2013 by scottdimmich

A winter storm with the potential for embedded blizzard conditions is now moving up the Atlantic coast of the United States. Very heavy snow is likely over most of New England today and tomorrow. Thousands of flights out of Boston, New York, and other airports in the northeastern U.S. have either been canceled or delayed as a result of this potentially historic storm.

This afternoon’s WRF model run gives most of Massachusetts, Connecticut, and Rhode Island 15-30″ of snow through 7am Sunday:

This afternoon’s higher-resolution WRF model gives 2’+ of snow to the Boston area by 1am Sunday:

This morning’s GFS model is more conservative with snowfall totals through 7am Sunday but still gives most of New England 10-20″ of snow:

Precisioncast, our in-house model, paints 2’+ of snow through the the weekend in and around Boston:

Blizzard Warnings, Winter Storm Warnings, and Winter Weather Advisories cover all of New England and parts of the Mid-Atlantic: 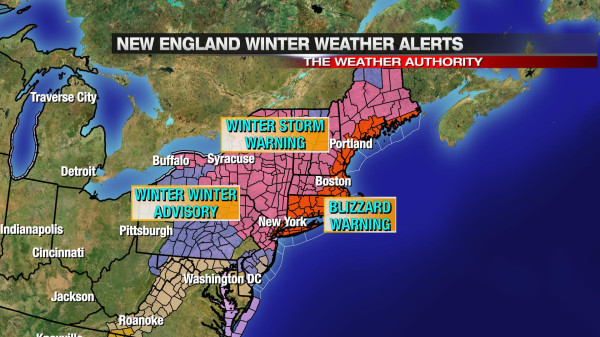 Why is so much attention being given to this winter storm? The simple answer is it will likely be historic. 27.5″ is the most amount of snow Boston has seen from a single storm (February 16-18, 2003). Many near Boston will likely see 2’+ of snow for the entire event. Compare that to our snowiest winter on record in Cincinnati (January 1978):

Travel is highly discouraged or temporarily against the law in parts of Massachusetts, Connecticut, and Rhode Island. This storm will make headlines!