Severe Threat For The Tri-State Sunday And Sunday Night

Models continue to suggest a significant threat for thunderstorms, strong storms, and severe storms in the Tri-State on Sunday and Sunday night. Since we are still a couple of days out, the exact timing and positioning of this system is still uncertain. There are, however, a lot of similarities in the weather setup for Sunday compared to Halloween night.

Why are we so concerned about the threat for severe weather this weekend? Simply put, the jet stream is strong, it will be warm, it will be rather humid, and there will be a lot of wind shear (changing of the speed or direction of the wind going away from the ground). Notice how I didn’t highlight instability; in the colder months of the year, severe weather events in the Tri-State often happen with little or no instability. The strength of the jet stream, temperatures, lift, and shear are much more important this time of year.

The Storm Prediction Center has placed the entire Tri-State under a SLIGHT risk for severe storms Sunday and Sunday night:

While damaging straight-line winds will be the primary severe weather threat, tornadoes and large hail are still secondary threat with the strongest showers and storms that develop on Sunday and Sunday night. In the forecast model world, there is a consistent signal that that storms will develop to the west and southwest of Cincinnati and move east to northeast with time; this thinking would suggest the main tornado threat will be focused outside of the Tri-State (where storms develop), but – given the amount of wind shear – tornadoes will be possible as showers and storms gradually coalesce into line later in the day and evening.

While it is just one model, Microcast suggests the main threat for severe weather will come Sunday evening. Microcast has a relatively low coverage of showers and thunderstorms Sunday morning at 8am:

Any sun that we get early Sunday will work against us, increase the amount of instability showers and storms will have to work with Sunday afternoon and evening. In this particular setup, sun and instability is not necessarily needed to get strong and severe storms; any sun we get will only bring up the risk for storms.

Microcast suggests the coverage and intensity of showers and storms will start ramping up during the afternoon and evening, especially west of Cincinnati. Microcast has most of the storms in the Ohio Valley west of the Tri-State at 4:30pm:

By midnight, showers and thunderstorms will be diminishing or ending in the Tri-State, as Microcast shows:

Again, Microcast is just one model. Other models are more aggressive with the chance for storms in the afternoon. Know that – for now – the severe weather window begins in the afternoon and continues through the evening.

Why are damaging winds the main threat? Because the low-level jet will be very strong Sunday afternoon and evening. The low-level jet is a stream of air about 5,000 above the ground that usually strengthens ahead of strong areas of low pressure. These winds above the ground can easily be pushed down to the surface with heavy rain or in downdrafts (during showers and thunderstorms). Notice the strength of the low-level jet over the Ohio Valley by 1pm Sunday according to the GFS model (Cincinnati is labeled with a black dot): 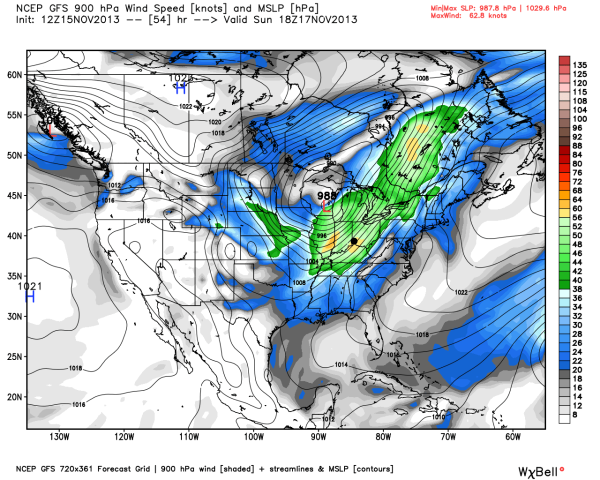 Winds in green are over 40mph, and winds in yellow are severe (over 58mph). These winds aloft aren’t necessarily what we will see at the ground, but heavy rain and storms will help to bring these winds above the ground down to the Earth’s surface.

This morning’s NAM model has the strongest divergence (spreading) of air aloft in the red circle by late Sunday afternoon (Cincinnati is in the black circle):

Divergence aloft tends to promote stronger updrafts and, thus, stronger showers and storms. Where their are uncertainties about exactly placement of the jet stream(s), we are in the zone of strong lift, and this means we have more than enough upper-level support for severe weather Sunday and Sunday night.

While instability can often have a big influence on the chance for thunderstorms, it isn’t as important this time of the year. If thunderstorms are likely (which they are Sunday), the SHREB parameter or index can be very helpful to a meteorologist in the colder months when looking a threat for severe weather. The SHREB parameter is helpful for getting a handle on a severe weather threat in the colder months because it focuses on temperature changes near the ground, lift in the atmosphere, and wind shear instead of instability (instability tends to be low in the winter even when we get severe weather).

SHREB values on Sunday and Sunday night are elevated in the Ohio Valley. This morning’s NAM model is very aggressive with Sunday’s severe threat (probably too aggressive), but it has SHREB values that are high (yellow, orange, and red) and support a Tri-State severe weather threat (Cincinnati is the black circle):

The ECMWF and GFS models suggest SHREB values will be lower during Sunday’s event, but still high enough to support severe weather.

SHREB tells us that instability isn’t really necessarily to get rough storms Sunday. Instability (sunshine) will only aggravate the atmosphere more than it is already primed.

But this discussion is more than just a chance for severe weather on a Sunday; this is a discussion of severe weather on a Sunday where the Bengals are playing and people are outside tailgating and watching the game. It’s much easier to go inside or take cover at home than it is in a parking lot or stadium. I am cautiously optimistic that the Bengals will be actively following the weather Sunday, but you should be prepared for strong and storms Sunday afternoon and evening – especially during and after the game. Ultimately, your safety is up to you. Whether you’re tailgating, going to the game, staying out after the game, or all of the above, you should have a plan to seek shelter if needed. Here is our latest Bengals forecast:

The warmth is welcome by most, but don’t write off the wind or chance for storms.

Now is the time to prepare! Don’t be caught off guard in the stands or tailgating on Sunday. While the timing and other specifics of this event are still uncertain, the threat for damaging straight-line winds, tornadoes, and large hail are all on play Sunday and Sunday night.

I’m working this weekend, and I’ll update you as new model runs complete!